Welcome to We Represent the 47 Percent.


During the 2012 Presidential Campaign, the nation watched the video tape on Mother Jones of presidential nominee Mitt Romney telling a room of wealthy donors,

"There are 47 percent of the people who will vote for the president no matter what. There are 47 percent who are with him, who are dependent on government, who believe that, that they are victims, who believe that government has the responsibility to care for them. Who believe that they are entitled to health care, to food, to housing..." and adding that his "job is not to worry about those people..." and that he will "never convince them to take personal responsibility and care for their lives."

That 47% is code for the people in this country who pay no federal income tax, a divisive and dehumanizing term that's popular among Republicans.

Novelist Julianna Baggott and her husband and creative partner David Scott were stunned. Romney's 47% was baffling on many levels, but mainly Baggott and Scott hoped that people didn't simply believe in his divided and inaccurate view of America. They wanted people to know who the 47% REALLY includes -- not the version of us Romney had invented, but the truth.

Julianna wrote an Open Letter to Mitt Romney and posted it to her personal blog. The post got a lot of traffic, including the attention of novelist Jon Jefferson who urged her to think of a way to create a space for more voices to join in.

Baggott and Scott talked it over. That night, she wrote an email to a dozen writers, asking what they thought of starting a quick-response blog dedicated setting the record straight. Did they think it was a good idea?

Instead of a poll of responses, they got letters to Mitt Romney -- from Pulitzer Prize-winner Richard Russo to 82nd Airborne paratrooper and poet Seth Brady Tucker.

They began posting the open letters. News spread. An intern, Lisa Marie Keene, signed on to help with the inundation of letters, pouring in.

We Represent the 47 Percent was born almost overnight. It quickly became a diverse collection of Open Letters that opened up a very specific moment in history, an abundance of voices that weave an intimate American portrait. These are letters from people who have been "those people," who have represented the 47% at some point in their lives, or who want to honor someone who has.

The 47% includes many elderly who are on social security -- a system they paid into all their working lives. And so we give you a letter from Robert Wrigley...


"Among those 47%, my parents: my father, who is 90, with Parkinson's, a decorated WWII Navy veteran and a civilian employee for the Air Force for 27 years; my mother, who is 85, who worked as a Rosie-the-Riveter in the shipyards of Bremerton, Washington. They are not victims. They have every day of their lives taken responsibility for their lives..."

And a letter from Dinty Moore, honoring his mother and his father, a World War II vet ...


"Once my father returned, he was scarred by the war and suffered those scars in many ways, so he never did manage to finish his degree, but he was always able to hold down a job, as an auto mechanic, and later in a steel foundry, until cancer hit him hard at age 60. He had paid into social security for more than forty years at that point, but only pulled out two years’ worth of benefits before he died."


The 47% includes people who have jobs and pay payroll taxes but because of low income and deductions, pay no federal income tax. And so we give you a letter from Erin Murphy who remembers the hard work of her own mother, sacrificing to make ends meet and raise her children on a school-teacher's salary.


"I can still picture my mother at the kitchen table, the tower of bills rivaling the stack of student papers waiting to be graded... We more than qualified for free school lunches..." And yet her mother found time for her own children and those of others. "I could write a book about my mother’s devotion to her students..."

And a letter from Katie Cortese about her Italian heritage and her mother's hard work.


"... what about my mother, who lived in a government-subsidized housing project in Charlestown, sewed her own clothes through high school, and paid for college with a cocktail of government loans, scholarships, and part-time work? " Cortese wrote Mr. Romney, "For my family and yours, temporary government assistance led to success and self-sustainability, not dependency."

Romney's 47% includes the truly poor -- and the children who grew up in those homes and relied on government services -- public school, free lunches -- for survival. We have a poignant letter from Carissa Neff.


"Without the structure of public school, a place where I was fed a free hot lunch every weekday (and breakfast, too, for a time), I went hungry a lot of the time school wasn’t in session.  At home I lived on rations of free government cheese, free government peanut butter, and potatoes.  I was a child freeloader.  I’m not being hyperbolic, Mitt.  For years and years, I just took and took.  I had to."

Romney's 47% includes students in colleges and universities, stringing together grants and fellowships, and those just out of school, in their first jobs -- some of whom are raising kids. And we offer a letter from Gayle Brandeis.

"These were lean, challenging years, but they were sweet years, and I am grateful for what they brought out in me and those around me. We knew we were digging deep and creating community, creating a sustainable world for our children, but you would have seen us as freeloaders. As nothing."


The 47% includes those who find themselves suddenly out of work, as was David Dickerson, who suffered a bad year; we have a letter from Trish Thomas Henley who bravely tells her story, saying, "I am the face of Welfare." And we have a letter from a young mother of three whose life was rocked by the sudden death of her husband.

These letters include the voice of  a recipient of a Purple Heart, the wife of a med student, a special education teacher, a union carpenter...

We have letters from those who share Mitt Romney's faith, but disagree with his disregard for the 47 percent; and we even have letters by those -- like the one from Erin Belieu -- who confess to their entitlement.


"And yet I still grew up feeling entitled—to my hopes, to my ambitions for the future. Not just entitled, but—even worse!—I believed I had an inalienable right to my dreams, to pursue the potential for happiness that is one of our country’s most cherished, founding principles."

Our letters also include those advocating for healthcare reform, like the letter from Melissa Wiley who is raising one child who beat leukemia and another with special needs.

And let's not forget that during that same talk in Florida, Mitt Romney made an infamous joke. "I'd have a better shot at winning this ... I mean I say that jokingly, but it would be helpful to be Latino."


We have a letter for that too -- from Chantel Acevedo.


The 47% -- those Romney claimed it was not his job to worry about -- has included many of us. His 47% has included those we love. His 47% includes those who work hard and who continue to dream hard.


We Represent the 47 Percent sought to humanize a statistic. The site will continue to stand. These are our stories, our lives, our voices. A vision of a divided America is doomed to fail. In the end, we don't represent 47% or 53%. We aren't numbers. We are a nation of individuals, and we are united.
Posted by Julianna Baggott at 7:45 PM 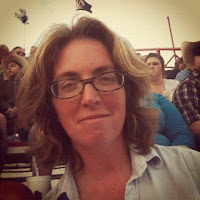